Opening for the Spin Doctors 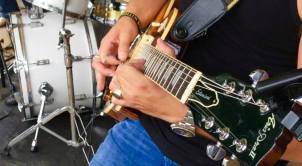 The Fans Came to Support Moonshine 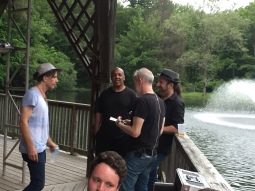 Being The Opener Has its Perks

Things began to pick up after the show at the Fez in Stamford and another at the Bull & Barrel in Brewster NY. The Bull & Barrel has a great country theme including everything from a cowboy boot flower vase, to its mechanical bull center stage! Next Margarittaville called us with an idea they had for a show featuring us following the famous Barrett-Jackson car show/auction which was scheduled for June in the Arena at Mohegan Sun. Unfortunately, we never could quite dot the I’s or cross the T’s and subsequently, the show was passed over to be rescheduled when the casino would host somebody like Jason Aldean or Keith Urban.

Now around April, we were gaining some real steam when we received an email and a phone call from folks regarding the upcoming annual Brews & BBQ Festival held yearly at the Ives Concert Park in Danbury, CT. This one was set for May but sadly for us, the Moonshine founders David and Deena had a family wedding so we were not able to accept the offer at this time. Our good friends  Jump The Gunn was offered the show and we were thrilled yet disappointed at the same time. Disappointed because we figured the opportunity might never present itself again, that is until mother nature came calling. There was a large storm that was to move in, and the event would have to be re-scheduled when the headliner was again available. The Spin Doctors team would offer a makeup date for July22nd and unfortunately for JTG the date was not a good one for them. Call it what you will, fate, good fortune and perhaps a just a little bit of old-fashioned luck. What we thought was gone for good, would soon be staring us right in the face once again. So after the rain out, we received an email from the venue’s booker. Jump the Gunn is unable to take the makeup date, is  Moonshine still available to open the festival? Hells to the yesssssssss we are!!!!! and so it came to be.

We had a show in Downtown New Milford set for the Thursday prior to our Saturday concert at the Ives Concert Park, it was called the Third Thursday Concert Series. The band was pretty pumped for both, but we had a bit of a problem. Emily was just married and was taking some time to travel the world with her husband………. Ouch, now what do? We had scheduled an audition with a young talented singer-songwriter we thought had a great look and sounded amazing, but after setting things up for a first addition she decided she lived too far away to validate her commute and would be unable to rehearse with us weekly until showtime. At this point, we called upon an old bandmate and good friend Elayne Uva, who was only too happy to help us for a few shows in our time of need. It was a lot of work on her part to learn so much material and on such short notice, but she stepped up to the task and man did she have the Nashville look! Gary Forbes our current drummer had a few conflicts as well, and was able to join us for a show at Odetah Camping/ Resort but would not be able to do the Thursday show with us in New Milford. So once again,  Moonshine was in a tuff spot. Enter Ray DeNardo,  who actually started off rehearsing early on in 2015 with the band,  but wasn’t able to commit fulltime and bowed out. Well, we had a great show at Odetah with Gary and Elayne, and a few of us camped out for the weekend and I like to think this is where the friendships began. Some smoking of cigars seemed in order, along with drinking, eating, and lots of laughs………. Did we say drinking? Lol!!!!

Then it was on to getting Ray up to speed for his few shows with us, starting with Third Thursday in beautiful Downtown New Milford. right on the Main Street Main Stage, then followed by our show at the Ives Concert Park. Ray, always the professional got up to speed in no-time at all. We rehearsed for a few months with Ray before playing Third Thursday, which was a great warm-up show before playing the Ives. It looked like the forecast would be great for both, which is always the gamble you take when booking an outdoor show. Little did we know what was in store for us in New Milford…….